The last couple of years have been a bit of a desert in the production of competition horses for myself.  Things have been really busy and I got caught up in the day to day business of riding, teaching and the tricky shuffle of a hectic competition schedule.  This is all perfectly normal I know, but I was so busy riding nice horses for my clients, that somehow I ran out of my own!  When my last few Thoroughbreds off the track decided to specialize in anything but eventing, I was semi-horseless and (obviously slowly) realizing the terrible error of my ways I decided to re-focus and re-organize.

I wanted a horse, but what exactly was I going to go for?  In the past I have always like the hotter, very athletic thoroughbred types.  Not always the easiest maybe, but fit and fast, like Fuzzy Logic.  Obviously I have been going wrong, as the last couple of years will show… Rebel chose a fat, lazy slug called Groover that takes half and hour to walk up from the paddock, trips over his own feet 5 times on the way up, sleeps more hours than a hibernating bear, and has a paunch most breeding mares would envy!  Don’t get me wrong, I am a huge fan of the fluffy orange ball, but he just doesn’t grab you as a superstar when you see him. He is of course, and as the highest placed Aussie horse at Athens it has been a huge lesson for me.

So I decided to get myself a lazy, clumsy thoroughbred, and Nicole Chipperfield had just the thing.  His name is Rio Lobo.  His racing career at Cessnock with Jeremy Sylvester was over after 3 preparations as he was “dead slow”.  After taking him for a gallop I have to admit that he really is one of those unique horses that seem to actually go slower the faster you gallop… just like our friend Groover.

Rio is by the USA stallion Eagle Eyed and he is big!  Too big for me was my first thought when I went to see him at Nic’s place at Lochinvar.  He is 16.3hh and I have always tended to like the smaller horses as I can sometimes struggle with the bigger ones cross country, purely from a strength point of view.  Firmly reminding myself to step outside the square, (I can always go to the gym!), I took one look at his gorgeous head and thought “Hello, here we go”.  I am a sucker for a beautiful thoroughbred head, and he has one of the best I have ever seen.  The look in his eye was lovely, so soft and relaxed, almost comatose really.

I gave him the once over, cue the wolf whistle! What a great hunk of spunk!  Head- great.  Ears-honest (very important to me!).  Neck- reasonable, didn’t love the way it came out of the wither and perhaps a touch short.  Shoulder- good slope, and powerful looking.  Front legs- straight and strong.  Back- my heart sank.  After spending the last couple of years struggling to deal with a sacro-illiac problem with Fred (Fuzzy Logic)  I was feeling a bit allergic to long backs.  He was also a little roached.  MMmm. Back End- built to jump.  Feet- Excellent.

Nik lunged him in the round yard and he moved easily though slowly…. let’s say he was conservative with his energy output.  He traveled nice and straight, and didn’t hit the ground heavily for such a big horse.  We then free jumped him and he had this great attitude.  He was completely relaxed and it just looked really easy for him.  He had an amazingly loose back end and I was starting to smile.

Then I hopped on and he was Groover the 2nd.  If you ever rode Groover, you would get a bit of a shock, he doesn’t feel like an athlete.  He probably feels more like a pensioner suffering from chronic fatigue syndrome.  Moving feels like an effort and moving energetically forward feels absolutely impossible.  I couldn’t possible sit to his trot so I progressed quickly to canter to avoid looking like an idiot.  This provided instant relief and I was impressed with the canter, it was good- no, it was great.  The canter in a jumper is so important and although hard to keep together Rio’s felt very powerful.

Nik was a gem and allowed me to take him for a week so my new friend Rio was loaded on the truck.  Note to readers: This generosity is highly unusual and not to be expected, but it really enabled me to test him in the 3 phases of eventing.

Dressage-  Rio is a big dinosaur to move around,  his feet got heavy when he got tired and he was a little weak behind, so we would trip a lot (so much for my love of elegant thoroughbreds).  Everyday was a progression though and there was definitely potential.

Show-jumping- I couldn’t wait to jump him under saddle after seeing him free jump. I was a little surprised because although he took me to the fence nicely, he was not that inspiring in the air.  I was beginning to wonder if my brain had still been frozen from the minus temperatures I had come from in the US when I saw him jump at Nik’s place. Despite his vaguely disinterested feeling, I trusted him straight away.  I knew he could jump and the thing that got me in completely was this feeling of confidence.

X-Country- I took him up to the x-country course at Lochinvar because I wanted to give him a good gallop to see how he felt at pace and to check his breathing and recovery.  He galloped well, but again no faster than your average dairy cow.  Of course he recovered quickly, his heart rate was definitely lower than mine!  We popped over the baby jumps and I was more than happy. 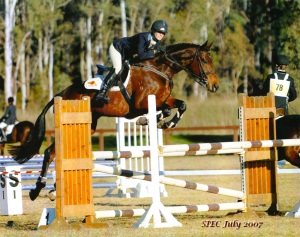 The new short format has placed emphasis on dressage and show-jumping.  Our horses still need to be extremely quick and agile (could be a problem), but with the speed and endurance phase severely reduced it has opened the door for a greater variety of breeds. Rio looks part warmblood. He moves better than the average thoroughbred, and seems to have the temperament to be very trainable and reliable in the dressage phase. He feels like a bold horse. He is a confident and strong minded which makes me think that he will cope with the demands of cross-country.  My only worry at this stage is that being so big, he could become too strong for me.  He should have plenty of scope over a jump, hopefully he will be careful.  The vet check was fine, we also scoped him to check his breathing because he is such a big fella- no issues there.

Attitude in an eventer is so important. We ask them to do challenging and sometimes fairly extreme things and it makes the job so much easier if they work with you.  I was impressed with his brain, and his overall rideability.  I trusted him completely straight away and your gut feeling when you ride a horse is so important.  This, and the fact that with such a good attitude, if he didn’t make a top level horse he would be very salable for the lower levels.

Does he have the goods?  The next couple of months will tell.  One thing is for sure, he will be getting a lot of work and attention, and I will be keeping everything crossed in the meantime!!!

NB: As an interesting aside Chris, we have just started a horse “Willy” who is my typical thoroughbred.  Small, fine and revvy.  It will be interesting to see how they compare at their first few outings!